Sona is one of the support champions in League of Legends. Her backstory is not a happy one. She grew up in an orphanage. Her inability to speak made any potential adopters turn their attention to other kids. Her only heritage was a strange instrument that no one knew its function. The caretakers tried several times to sell it but for some reason, it was always returned. It was like the instrument could not leave Sona's side. Eventually, a rich woman with a personal interest in the instrument adopted Sona. Her adopter called the instrument an etwahl and taught Sona how to play it. Sona discovered that the music produced by the etwahl can be used to bind others' will and even for destructive purposes. 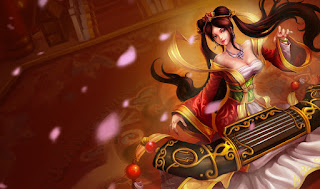 Sona's basic spells are Hymn of Valor, Aria of Perseverance, and Song of Celerity. All these basic abilities also give an aura that affects the caster and nearby allies. Power Chord is a passive ability that allows the caster to gain a bonus to magic damage and an additional effect if the attack is preceded by three spells. Hymn of Valor does damage to two targets that are in range and boosts allies magic damage. Aria of Perseverance is a healing ability. It heals the caster and another player. The buff it provides gives defense for Sona and an ally. Song of Celerity gives a boost to movement speed. Crescendo is her ultimate ability. It deals damage and crowd controls enemies. It gives Sona a buff that decreases the cooldown of her basic abilities. This ability should be used when more enemy players are in the same place.

When playing with Sona, players should make use of their healing ability to save allies and make sure to be close to other players for the auras' effects. When Sona is on the enemy side, it's normally the first champion to go down. Players should avoid stacking when Sona is nearby so they don't get caught in her crowd control.

So this is a small guide of Sona I provided for you. Next week, we will start talk about LOL RP Card buying. Free tips will be offered for you to get RP Card online cheap and easy.

Posted by lolrpcardbuyingtips at 11:33 PM